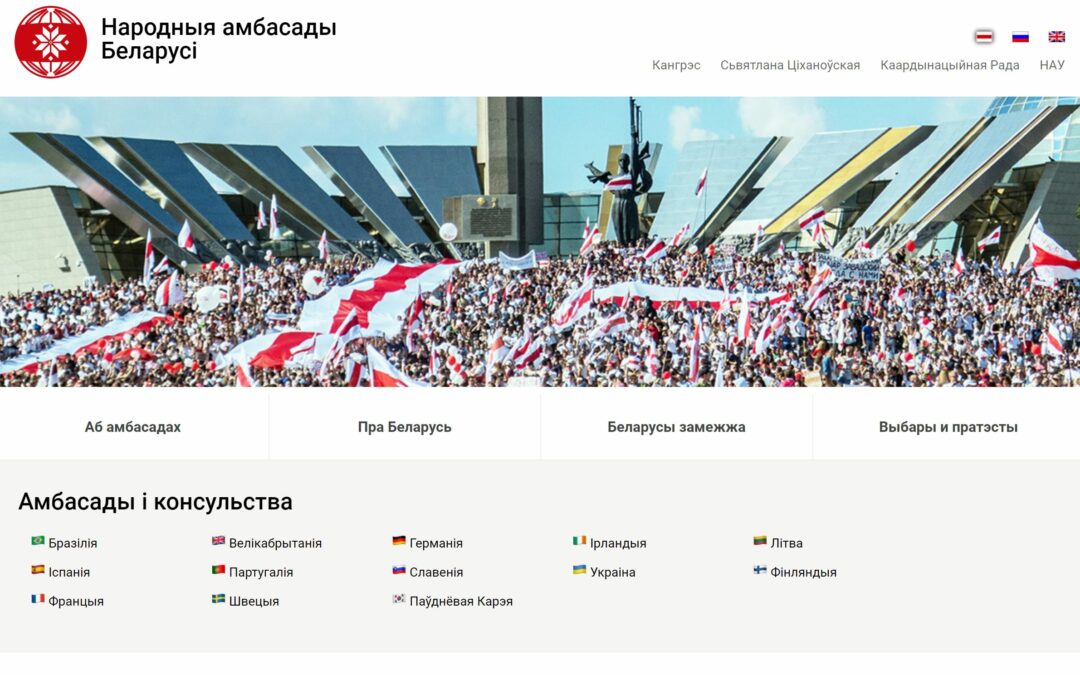 On December 10th, the People’s Embassies of Belarus initiative was launched.

The People’s Embassies are an initiative of the Belarusian diaspora community “Belarusians Abroad” with the support of the National Anti-Crisis Management to create representative offices of democratic Belarus abroad. This is because of the loss of legitimacy of the current government in the country and abroad. The opening ceremony was attended by Svetlana Tikhanovskaya and representatives of the Presidium of the Coordination Council, who are grateful to the Belarusians abroad for their active position and are ready to support the project.

The idea of ​​creating the People’s Embassies came about after the elections in Belarus were identified as fraudulent by the electorate and the international community, The Ministry of Foreign Affairs of Belarus and its embassies supporting the illegitimate government have lost the right to represent the interests of Belarusians abroad.

The national leader Svetlana Tikhanovskaya supported the Belarusians abroad and stated: “It is very symbolic that today, on the World Human Rights Day, that the People’s Embassies are opening all over the world.

The Belarusians abroad play a very important role in shaping the future of democratic Belarus.

Today, more than ever, it is important for us to be together. Dear Belarusians abroad, please do not stop, continue to inform the residents of your countries about the situation in Belarus. Belarus should not leave the world agenda. I urge you not only to talk about the brutality of the regime, about torture and political prisoners, but also about the unique Belarusian nature. By fighting against a power that is against human rights, we show the world the importance of human and civic positions. Thank you to each of you for your work. Only together we can defeat the lawlessness and as soon as possible bring Belarus closer to freedom. Long live Belarus!”

The creation of the People’s Embassies was discussed at the World Congress of Belarusians on October 30th – November 1st and is formalised in its Resolution. The initiative to create such representative offices of democratic Belarus abroad was supported by the national leader Svetlana Tikhanovskaya and the National Anti-Crisis Management.

The People’s Embassies will perform official functions: providing information about the situation in the country, helping fellow citizens, and defending the interests of Belarus in international organisations and political institutions.

Pavel Latushko, member of the Presidium of the Coordination Council stated:

“It is important to note that the initiative to create alternative Belarusian representations abroad was created by the participants of the World Congress of Belarusians, which was held on October 31st – November 1st of this year. This forum was attended by about 150 thousand citizens and people from Belarus living in more than 50 countries of the world. It is noteworthy that the opening ceremony of the people’s embassies is taking place on December 10th, on the 72nd anniversary of the adoption of the Universal Declaration of Human Rights by the UN General Assembly, which has become the cornerstone of the modern human rights system. I am convinced that the opening of the People’s Embassies is only the first step towards building fundamentally new relations between democratic Belarus and its neighbours and other foreign partners.”